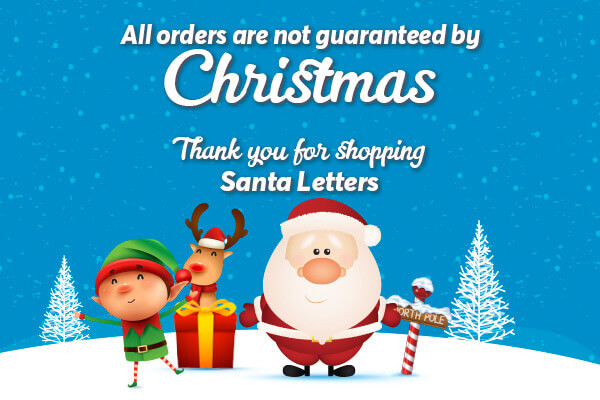 The History of Santa Claus

We all love Christmas and especially the traditions that go with it, like getting letters in the mail from Santa! Santa is probably the most beloved and exciting tradition, especially for children. But where did the tradition of Santa come from? Let's go back in time and explore this jolly character's origins.

The Origin of Santa Claus

The first signs of Santa lead back to a 4th Century monk known as Saint Nicholas. Saint Nicholas was born around 280AD in Patara, in what is today Turkey. He was extremely religious and generous from a young age and later became the bishop of the small village of Myra. Saint Nicholas gave away all his inherited wealth and travelled the countryside helping the poor and sick. One of the most well-known stories of his kindness is of the three sisters that he saved from being sold into slavery and prostitution by their father. He gave them each a dowry so they could be married.

Saint Nicholas was depicted as a bearded man dressed in canonical robes, sometimes carrying a sack over his shoulder. He became known as the protector of children and sailors and by the Renaissance he was the most popular of all the saints. Even after the Protestant Reformation which discouraged saints, Saint Nicholas retained his popularity. Saint Nicholas’s Day was celebrated on the day of his death, on December 6th.

In England, Father Christmas is thought to have his origins tied closely to the pagan god, Odin. He was believed to fly over the roof tops on his eight-legged horse,Sleipner, dropping bread down to the poor and hungry to enjoy during the mid-winter feast of Jul. Odin was often known as Yule-Father.

As Christianity became more dominant the figure of Odin or the Winter king became more associated with the festivals celebrating the birth of Christ. By the 1400’s he was thought to be a chivalrous knight known as Sir Christmas and later Captain Christmas.

It was only under Oliver Cromwell’s governance that he became Old Father Christmas to make him seem more venerable. Under Charles ll, the ‘old’ was dropped and he became known as Father Christmas. He was depicted as an elderly man with a white beard and long, fur trimmed robes. Father Christmas represented the spirit of good cheer at Christmas time and it was his job to ensure everyone had a merry time but he had nothing to do with gift giving or children.

Many of the Northern European countries adopted the legend of Saint Nicholas calling him Sinterklaas. None celebrated Sinterklaas with the passion and detail as the Dutch. The Dutch version of Saint Nicholas, Sinterklaas, rode on a donkey and wore a tall, red pointy bishop’s hat. Children would leave their clogs stuffed with grass outside their doors for the donkey to eat. In the morning their shoes would be filled with sweets and gifts.

Sinterklaas was also known to ride over houses on a huge white horse, staff in hand. His helpers would listen at chimneys to hear if children were being naughty or good. The legend of Sinterklaas reached America in 1664 when Dutch families in the New Amsterdam colony joined together on 6 December to honor his death. By this time Sinterklaas was depicted wearing anything from a blue three cornered hat, red waistcoat and yellow stockings to a broad-brimmed hat and huge Flemish trunk hose.

On December the 6th, 1810 - the New York Historical Society, under the foundership of John Pintard, hosted their first Saint Nicholas anniversary dinner. For the occasion, Pintard commissioned Alexander Anderson to draw an image of Saint Nicholas to be handed out at the dinner. Although he was still depicted as a religious icon the image also showed gifts in fireside stockings and only good children receiving presents.

In the 200 years that followed Dutch settlers strived to retain their culture and traditions in the face of British settlement. One proud Dutch settler, Washington Irving, wrote a book called ‘The Knickerbocker’s History of New York’. It was a satirical look at Dutch traditions and stories. In his book, Irving described Sinterklaas flying across the sky in a wagon dropping presents down the chimneys of good children.

The English New York settlers soon became familiar with jolly Sinterklaas and joined in the joyful celebrations of Saint Nicholas’s Day. They soon began to combine these celebrations with their own Christmas celebrations, morphing Father Christmas and Sinterklaas into one.

The picture we have of Santa today is largely thanks to Clement Clarke Moore’s 1822 poem “An Account of a Visit From Saint Nicholas.”

Moore was a friend of Washington Irving’s and, being inspired by Irving’s tales, he sat down to write his children a Christmas poem. Moore drew on Irving’s images but changed some of the aspects to be more familiar to the English way of life. The wagon was replaced with sleigh bells which was a common means of transport for the English.

He replaced horses with reindeer to give Saint Nic a mystical outlandish appeal, hinting that he came from far off lands that few had travelled to. In this poem, better known as ‘Twas the Night Before Christmas’, Saint Nicholas is described as a “right jolly old elf” with “a little round belly”. His miniature sleigh and tiny reindeer are mentioned as well as his magical decent down the chimney. But unlike our present day Santa, In the published version of the poem Saint Nicholas is illustrated wearing a yellow suit with white fur trim.

But despite Santa’s popularity there was still no consensus by the mid 1800’s as to exactly what he looked like. He was often depicted in bishop’s robes or a pointy hat, long coat and straight beard. Despite Moore’s description of a ‘round belly’, he often appeared as a thin gaunt character in many images.

In 1863 Santa’s present day image was embedded in the public’s mind by an image created by political cartoonist, Thomas Nast. He drew on Moore’s poem, as well as the Uncle Sam propaganda image of the time, to create a picture of Santa Claus as a fat, cheerful man with a white beard and dressed in a star spangled banner jacket and striped pants.

Nast’s image of Santa Claus appeared in ‘Harper’s Weekly and was commissioned as an image of Santa bringing gifts to soldiers fighting the American civil war. The image was so popular that over the next 40 years Nast’s Santa images did not deviate from this jolly, old man except for exchanging the American flag jacket for a plain red coat.

Nast’s later drawings depicted Santa’s home in the snowy North Pole filled with elves and a large book showing the names of children who had been naughty or nice. It was also Nast who was responsible for the image of Mrs Clause.

Although Nast drew Santa wearing various color suits over the years from blue to green to yellow, it was red that became his preference and it was the red suit that was adopted by the Coca Cola Company.

Coca Cola and its intensive Christmas advertising also played a role in cementing the image we have of Santa today in people’s minds. An artist from the D’Arcy Advertising Agency, named Haddon Sundblom, was hired to create images of Santa for magazine and newspaper advertisements. He drew on Moore’s description to create an image of Santa that reflected his true essence. From 1931-1964 Sundblom’s Santa images captured the public’s imagination.

It was only by the late 19th century that the image of Santa as we know it today was finally set. His red and white suit and hat are customary although warm countries like Australia sometimes illustrate Santa in swimming trunks but his jolly demeanor, bulging belly, twinkly eyes and white beard are mandatory and are now a part of every image.

Santa did not pop into existence but was rather a melding and morphing over time of many countries folklores, traditions and beliefs. It is thus no wonder that Santa is a universal and much loved figure.